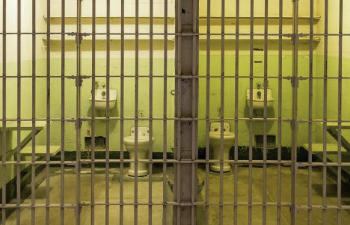 Reserved for the most dangerous inmates, solitary confinement, at least for most of the 20th century, included spending 3-4 days in isolation. Supporters claim that the practice is standard for keeping prisons safe, while others call it “a prison within a prison,” as noted by Frontline. Even so, the overuse of solitary confinement today has human rights activists and others concerned about torturous conditions and the psychological impact—and rightfully so.

NBC News describes the harrowing account of a Georgia prison inmate whose handwritten complaint caught the attention of a skeptical judge, forcing the state to open its isolation units to outsiders. The prisoner, Timothy Gumm, was a convicted rapist, placed in solitary confinement following a failed attempt to escape. At the time (2010), Gumm was told that he would remain in isolation indefinitely. As such, he remained there for five years, spending almost 24 hours each day in a windowless cell. He lost contact with family members and dropped 50 pounds. Yet, perhaps most unnerving is that he was deprived of almost all environmental and social stimuli.

Having studied prison conditions for 40 years, a social psychologist noted the conditions of a Georgia isolation unit, describing the units as metal cells with no openings. One unit was reportedly smeared with blood, amid the anguished voices of prisoners screaming and crying for help.

When asked to appraise the special unit at the Georgia Diagnostic and Classification Prison, expert Craig Haney described conditions in the prison’s isolation unit as some of the “harshest and most draconian” in the country, putting individuals at risk for “irreversible and even fatal harm.” On the heels of a federal lawsuit filed by a prisoner inside the prison’s solitary confinement unit, Mr. Haney’s report also acknowledged the facility’s prisoners as some of the most psychologically traumatized persons he has ever assessed, given this context.

Bringing light to the toxic, inhumane conditions of the facility, and its misuse of solitary confinement has hastened several inmates to share testimonies of their very long duration of time spent in isolation, including the intense uncertainty and mental agony.

Though there’s growing momentum in curtailing the use of solitary confinement across America, it is a slow-moving shift.

Committed to fighting for those that have endured needless suffering, pain and injury, the Harman Law Firm goes after the truth, realizing that a case has the potential to impact an entire community. If you’ve been hurt due to being kept in solitary confinement for an extended period of time, and you’d like to know if you have a case, call the team at Harman Law Firm in Atlanta today.